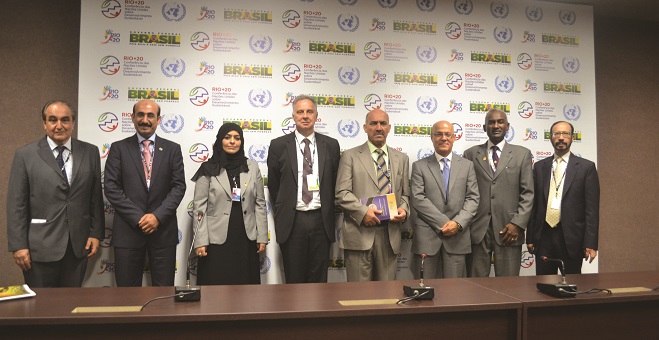 The United Nations Conference on Sustainable Development (UNCSD) was organized in Brazil from 20 to 22 June 2012 in pursuance of the General Assembly Resolution (A/RES/64/236), marking the 20th anniversary of the 1992 United Nations Conference on Environment and Development (UNCED), in Rio de Janeiro, which issued the Agenda 21, and the 10th anniversary of the 2002 World Summit on Sustainable Development (WSSD) in Johannesburg, which issued the Johannesburg Plan for the implementation of sustainable development.

The UN was keen to hold the Rio+20 Conference at the highest possible level, in order to come up with a focused political document that can bridge generations to a safe sustainable future. The UNCSD was preceded by two important meetings that took place in Rio de Janeiro. These are:1. 3rd Preparatory Committee Meeting of UNCSD (13 -15 June 2012),2. Nongovernment Dialogue on Sustainable Development (16 -19 June 2012),The Nongovernmental Dialogue was very important for representing all sectors of international society in the outcome of the Summit.

UNCSD2012 Outcome in Brief Even though 86 heads of states/ governments and representatives of 191 countries attended this grand event, the Rio+20 outcome document was described by most media and scientific entities as “not up to the ambitions”. The Rio+20 did not come up with any agreements or proposed conventions as was the case of the Rio 1992 Summit (UNCED). The document was more of a series of hopes without any commitments of funding or timetable for implementation. Many very important parts were omitted such as:

While governments at Rio agree that Green Economy is the right way to achieve sustainable development, they failed to agree on policies and plans to make it come true. Hence, the document is more of a declaration of good intentions.

The UN is actually unable to impose any measures to reduce the carbon or environmental footprint, especially in industrial giants whose leaders were absent such as the USA, Germany and the UK. So big issues like hunger, poverty, desertification, over exploitation of marine resources, deforestation and the regression of biodiversity will be depending on the will and capabilities of each country or regional organization. However, the outcome was not all negative. Rather, there were some positive sides of the conference as follows:

One of the most prominent side events of Rio+20 was the demonstration of the indigenous people of North Brazil. These people, who live in the forest, protested against deforestation and dams which are destroying their traditional way of living.

The UAE participation was outstanding at the Rio+20. The vision of sustainability and green economy in UAE was clearly portrayed through grand initiatives and innovative ideas towards a sustainable future for UAE society, the region and the world at large. The Zayed International Foundation for the Environment, in particular, was very successful in delivering its message and these are detailed below. 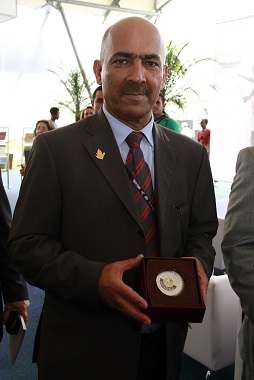 Main objectives of the Zayed Foundation at Rio+201. To launch the Arabic version of UNIDO POPs Toolkit for the Investigation and Management of Contaminated Sites
2. Promotion of the Zayed International Prize for the Environment in its 6th cycle
3. The participation in meetings and discussions on basis of the declarations and recommendations of the Foundation’s conferences and workshops
4. Promotion of the outstanding UAE initiatives of environment and sustainable development as follows:
a. Presentation of the Zayed International Prize for the Environment worldwide
b. Presentation of the Emirates Appreciation Award for the Environment to the UAE society within the UN slogan of “Think Global and Act Local” c. The Dubai Police HQ initiative of “Planting One Million Trees in Dubai Emirate”
5. Strengthen the partnerships and dialogue with different regional and international organizations, scientific institutions and government organizations of other countries for the promotion of sustainable development
6. Contribution to the success of the summit and UAE participation at the Earth Summit

Activities and Achievements of the Zayed International Foundation for the Environment1. Activities and achievements of the Foundation in the last decade made up an important part of the video and touch screen presentations in the UAE Pavilion.
2. A Press Conference was held by the Chairman of Zayed Foundation, together with the Director of Environment in UNIDO, to launch the Arabic version of UNIDO POPs Toolkit for the Investigation and Management of Contaminated Sites. Books and CDs were distributed at the convention center (Rio Centro).
3. A Press Conference was held by the Chairman of Zayed Foundation in the UAE Pavilion to talk about the 6th cycle of the Zayed International Prize for the Environment. Brochures and flash sticks were distributed to delegates.
4. A Press Conference was held in the UAE Pavilion by the Deputy Chairman of Zayed Foundation and the Secretary General of the Zayed International Prize for the Environment to introduce the Emirates Appreciation Award for the Environment as a model of “Thinking global and acting local”. Booklets were distributed in the Pavilion.
5. The Foundation presented a short film on the “Dubai Police HQ initiative of Planting One Million Trees in Dubai Emirate” as a model for implementing the UN initiative of planting one billion trees worldwide.
6. Bilateral dialogue and coordination included the chairman’s meetings with:
a. Head and secretariat of the UN Conferences Department to discuss the initiative of “PaperSmart Conferences” where the model of “Paperless administration” of Dubai Government was presented.
b. The Executive Director of the Desertification Convention where the two parties agreed to hold a workshop in Dubai in preparation for the COP18 of the Convention.
c. Several other meetings were held with the Brazilian Ministry of Environment, Italian Ministry of Environment, Italian Head of EXPO International, Flamingo Club and several Civil Society Organizations. Therefore, in spite of the difficulties faced with transport, which consumed four hours each day, and the tough security measures, the Zayed International Foundation for the Environment has contributed significantly to the success stories of the Rio+20 Summit as well as to the UAE participation.